A Bit of Faith

And I Set It Free

This was my first post since some began figuring out who I was, and to avoid persecution as a non-liberal in an academic setting, I shut down the blog.

But it has weighed on my mind, even though I have gone on to other, even more rewarding blog efforts.

And I think the problem is that I have not fully cast it loose.

And so that is what I have done. I am intentionally losing the password for what remains of my blog. I hope that you find some small inspiration in the little that is left here.

I have left the lights, and the comments on.

I will not be back.

May God bless your journeys and your comings home.

Peace,
TWS
Posted by The Western Seminarian at Wednesday, September 12, 2007 No comments:

Six years ago, we woke up to evil

Thank God for George W Bush, who has led us in our fight against evil for the last six years.

Today terrorists from around the world flock to die at the hands of our military and the new governments in Iraq and Afghanistan.
Thousands upon thousands of evil, misguided people have perished there.

Who want to see terror and death sweep over that nation again.

Who don't mind that Afghanistan would naturally fall next.
Who can't see that the next target for Terror after Afghanistan and Iraq lies in the West.

Who fail to see, hear or listen as terror attack after terror attack is launched by Islam
against peaceful peoples - in Spain, in Britain, in Germany, in Israel, in India, in Malasia, in Pakistan, in Jordan, in Turkey, in France, in Sweden, and in almost every country around the globe.

But no significant attack has been a success here yet, not in six years.
Six years of prosperity.
Six years of some of the lowest unemployment rates in the world.
Six years of strong, healthy stock markets.
Six years of Americans going about their business, raising children, building homes, finding jobs.

And you should take a moment today, and thank him too.
Posted by The Western Seminarian at Tuesday, September 11, 2007 1 comment:

Too Much *IS* Enough

I always knew this day would come. This blog has become too popular and well known, and the circles in the faith world being so very small, I must wrap up operations here, and blot out the evidence as best I can. :).

Many thanks and blessings to those I met upon the way, no matter if we agreed or not. It was a worthy cause, and a pleasure to fight it.

The Peace of God, which passes all understanding, be with you each and every one.

TWS
Posted by The Western Seminarian at Friday, January 26, 2007 4 comments:

Is LGBT a Single Word?

Something which has not drawn a lot of discussion that I have noticed is the last two letters of the LGBT quadrangle. In demanding equal rights, and equal ability to serve, activists throw around 'LGBT' like an indivisible unit. Certainly it is not. In case you do not know, dear Reader, LGBT stands for Lesbian, Gay, Bisexual, and Transgendered. Imagine an equal reception, equal ministry for these.

How can we welcome an actively Bisexual priest? Even the most liberal Dioceses have problems with sexually active single, straight priests, ....so, ....openly Bisexual? And active? Doesn't this go against the theology we claim is expressed in committed relationships? Or perhaps we will only accept bisexuals in committed relationships, - certainly discrimination against the single.

And then there are the transgendered. People so ill-at-ease with their born sex that they choose surgical and chemical means to alter themselves. Are these persons of confused and confusing sexuality also fertile ground for the Priesthood? Or are their own issues likely to swamp any call they might receive?

Perhaps they are not AS fertile ground for ministry. Perhaps not. But perhaps we need to be open to them, too.

Some seed will fall on barren ground, some on rock, but some will fall on good earth, and bring forth. -some ten, some twenty, and some a hundred.

May it not be that my church steals away the seed that would have borne fruit.

The Flag of the United States of America

Old Glory
The Stars and Stripes
The Star-Spangled Banner
The Red, White, and Blue
The Flag of the United States of America

"Resolved, That the flag of the United States be made of thirteen stripes, alternate red and white; that the union be thirteen stars, white in a blue field, representing a new Constellation." - June 14, 1777, Continental Congress

Called the Red, White And Blue

13 Stripes, for thirteen colonies that dared to resist Tyranny.

50 Stars, one for each state, representing "the divine goal to which man has aspired from time immemorial"

Stripes "symbolic of the rays of light emanating from the sun."

White for Freedom, Purity, and Freedom, the ground upon which the other colors stand.

From Wikipedia: "Many citizens understand the flag to represent the freedoms and rights guaranteed in the U.S. Constitution and its Bill of Rights and perhaps most of all to be a symbol of individual and personal liberty as set forth in the Declaration of Independence."

Previously on this topic: Our Flag


Technorati Tags: The Flag Of The United States Of America Old Glory The Stars And Stripes The Star Spangled Banner Western Civilization
Posted by The Western Seminarian at Tuesday, December 05, 2006 No comments: 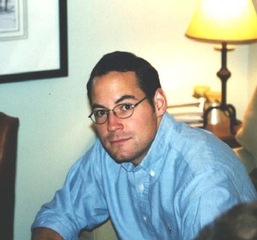 Imagine a man from Brown
An ex-footballer - offensive lineman.
A big fan of the San Francisco Giants.
Someone who loved the Beatles.
Someone who specialized in the financial services
Services that made the World Trade Center,
and the New York City Financial community hum.
Someone described as sweet, a big man -
Large hearted, large bodied, broad minded.
A family man, linked strongly to his siblings,
caring about their careers and lives.
A Novato California man,
transplanted to the big city,
where he was doing new things,
succeeding in new ways,
making a difference.
A life full of promise,
full of energy,
full of caring.
Paul has moved on to a new job now,
one even more service oriented,
even more about helping people,
even more about guidance.
He is still with us,
still helping,
still watching
still caring.
It may be that the people who stole him from us
really shared him with us all.
Wisdom 3:
But the souls of the righteous are in the hand of God,
and no torment will ever touch them.
In the eyes of the foolish they seemed to have died,
and their departure was thought to be a disaster,
and their going from us to be their destruction;
but they are at peace.
For though in the sight of others they were punished,
their hope is full of immortality.
Having been disciplined a little,
they will receive great good,
because God tested them and found them worthy of himself;
like gold in the furnace he tried them,
and like a sacrificial burnt-offering he accepted them.
In the time of their visitation they will shine forth,
and will run like sparks through the stubble.
They will govern nations and rule over peoples,
and the Lord will reign over them for ever.
Those who trust in him will understand truth,
and the faithful will abide with him in love,
because grace and mercy are upon his holy ones,
and he watches over his elect.

Peace to you Paul;
watch over us...
and pray for peace, honor and bravery for the rest of us.

That Shining City Upon A Hill

"And whatever else history may say about me when I'm gone, I hope it will record that I appealed to your best hopes, not your worst fears, to your confidence rather than your doubts. My dream is that you will travel the road ahead with liberty's lamp guiding your steps and opportunity's arm steadying your way. My fondest hope for each one of you -- and especially for young people -- is that you will love your country, not for her power or wealth, but for her selflessness and her idealism. May each of you have the heart to conceive, the understanding to direct, and the hand to execute works that will make the world a little better for your having been here. May all of you as Americans never forget your heroic origins, never fail to seek divine guidance, and never lose your natural, God-given optimism. And finally, my fellow Americans, may every dawn be a great new beginning for America and every evening bring us closer to that shining city upon a hill."